This is an update correcting a previous post Fear Not CO2!  I discovered math errors that invalidated the main conclusion.  I apologize for not seeing the problem before posting.

At Quora Paul Noel answers the question Is climate change the biggest catastrophic risk facing humanity today? Text below in italics with my bolds

NO it is not even an issue you need to worry about.

Look closely. The biological adaptation is eating up the CO2 almost as fast as it is being emitted and the adaptation is getting faster every year. 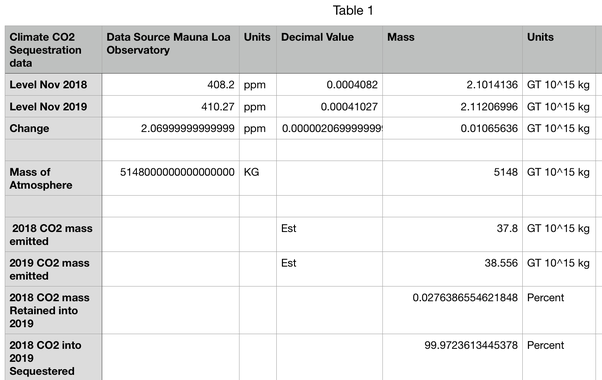 Out of the over 38 GT output in 2019 only 0.02 GT will not be sequestered naturally and by next year that will be gone. The plants are eating up the CO2 just a few days after the release. They are happily eating it up just fine. You don’t even need to plant trees. Nothing against trees here. I like them.

This is the TRUMP CARD on the game. With this known, it is impossible to imagine the problems proposed are happening regardless of all other issues.

I reblogged an answer from Quora with an analysis and conclusions new to me. I thought it interesting if it held up to scrutiny.. Afterward I became uncomfortable when double checking the math, and so I am retracting my support. One smaller issue was noted in my post regarding CO2 having a larger weight (44) than the average air molecule (29). Thus calculating CO2 mass in the atmosphere should apply a ratio of 1.52. That does not in itself materially affect the finding.

The Table produced by Paul Noel is shown above..

The more substantial issue is having equivalent units of mass for comparing atmospheric CO2 and human emissions of CO2. The proper unit is Gigatons since that is how emissions are reported. One GT is defined as 1 billion (10^9) metric tons and 1 metric ton is 1000 (10^3) kilograms. So one GT is 10^12 kg.

The mass of the atmosphere is calculated using air pressure and area, with a little variation in the results obtained by researchers. A typical standard is 5.148 x 10^18 kg. That converts to 5148000 x 10^12 kg or 5148000 GT. Once that value is plugged into the table, the results are very different. I had recognized that 10^15 was not GT, but thought it was only mislabeling. Later I found that the comparison was distorted in the process.

It is clear that the claim of 99% sequestration of emissions is an artifact of faulty math. A better approximation is 57% for emissions reduced by natural fluxes.

This does not mean we should fear CO2. For one thing the greening of the planet and record annual crop yields are a great benefit from both warming and higher atmospheric CO2. It is also the case that estimates of human emissions (fraught with uncertainty) are small compared to natural fluxes, which are estimated with error ranges exceeding emission amounts. Further, the sensitivity of temperature to rising CO2 is assumed to lie in a wide range.

My views on the CO2 cycle are in the posts:

Who to Blame for Rising CO2?