Out of the darkness and gloom from climate doomsters shines a declaration of energy abundance, and positive prospects for future well being.  Robert Bradley Jr. writes March 14, 2019 at Master Resource  Perry’s “New Energy Realism” (freedom and fossil fuels are essential, moral, unstoppable) Excerpts in itallcs with my bolds and images.

“The lesson is clear. We don’t have to choose between growing our economy and caring for our environment. By embracing innovation over regulation, we can benefit both. And THAT is the heart of our New Energy Realism.”

At yesterday’s CERA conference, DOE Secretary Rick Perry did not quite come out and say it. But it’s a fossil-fuel world. Some bones were thrown out for the politically correct, economically incorrect energies (grid wind and solar, as well as batteries/electric vehicles), but make no mistake. The philosophy of the US Department of Energy is let the US-led global boom in oil, natural gas, and coal continue.

Read between the lines. The fossil fuel boom is great for America and the world. Peak Oil and “the limits to growth” are refuted. Energy reliability (versus intermittency) is key. Heavy regulation of oil and gas is failure. New regulation and pain are unnecessary.

And you don’t even need to mention the Green New Deal.

The Obama era’s creeping radicalism to “keep fossil fuels in the ground” is being reversed. The CO2 mitigation window for the activists is closing rapidly, with the world energy market leaving the Paris accord in shambles. It’s a fossil-fuel world.

“Just the other day the Meridian Spirit embarked from Sabine Pass with an LNG shipment to India. And just last week a LNG tanker left Cove Point, Maryland with its first shipment. These shipments underscore the Trump Administration’s desire to export more natural resources and innovation technologies to the world.”

“DOE [recently] met with producers and midstream developers to identify the next generation of technologies to unlock more of our nation’s resources. Whether carbon capture, developing new solar technology or stepping up efforts on storage, there is a tremendous amount of optimism in the energy sector and for obvious reasons.”

“Energy security is a roadmap to economic prosperity.”

“But today, we have the opportunity to reaffirm a new direction which I call the New Energy Realism. This ‘new energy realism’ rests on the fact that America is in the midst of incredible energy progress.”

“Due to a cascade of technological breakthroughs driven by innovation, America is producing abundant, affordable energy from a wider range of sources than we ever thought possible … and we are using this energy more cleanly and more efficiently as well.”

“… our successes refute old myths, debunk false choices, and transcend limitations, pointing the way to global energy security and shared prosperity. This dramatic progress is a decisive break from the 1970s, when America began pursuing a fundamentally flawed energy policy for which we paid dearly.”

“Those who believed in it claimed that the days of energy abundance were over. It was said we had a permanent energy shortage. It was said that even if we discovered new reserves, they would be too costly to produce or impossible to use without harming the environment. And the solution proposed was a bleak one — draconian regulation of energy.” 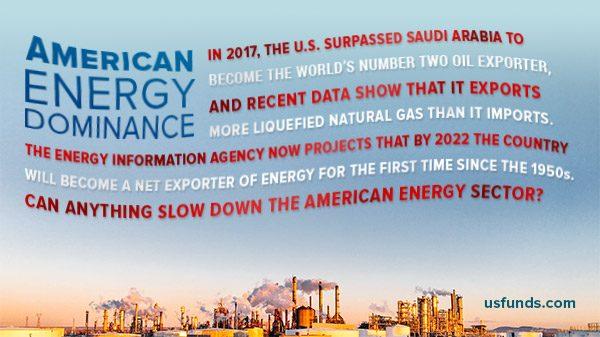 “Truth be told, we had no shortage of energy. What we had was a shortage of imagination and a loss of confidence in our ability to innovate. Clearly, the naysayers weren’t realists at all… they were pessimists blinded to the reality of America’s innovative capabilities. And unfortunately, this blindness ruled in one of the least innovative places on earth….Washington, D.C.”

“In a place that so obviously favored regulation over innovation, it was no surprise when the government used one thumb to promote a favorite technology and the other hand to regulate those they didn’t like.”

“In states like Texas, taxes were cut and regulations kept simple and transparent, giving people both the freedom and the incentive to innovate. And with innovation came a revolution in energy technology.”

“As a former Texas governor, I’m proud that the major breakthroughs in hydraulic fracturing and horizontal drilling – leading to our historic natural gas boom — began right here in this state.”

“From fossil fuels to renewables…supply rose…costs fell…efficiencies increased…and diversity blossomed. And something else happened as well. Our environment did not become worse. By nearly any measure, it became better, even as our economy expanded and energy development reached new heights.”

“The lesson is clear. We don’t have to choose between growing our economy and caring for our environment. By embracing innovation over regulation, we can benefit both. And THAT is the heart of our New Energy Realism.”

“Over the past year, President Trump and his Administration have brought this realistic view to Washington… and we are seeing its benefits. He has cut taxes and reduced regulations by historic numbers, putting Washington squarely on the side of innovators and investors.”

“… this can only help the President’s plan to spur the construction of more infrastructure. Tax reductions will cut a major cost of doing business, while his proposal to reduce the permitting process to just two years will give investors the confidence to provide the necessary capital and communities visibility on project completion.”

“The President has also signed off on critical new pipelines. He has removed draconian oil-and-gas restrictions on responsible exploration, supported clean coal technologies, and seeks to reinvigorate civilian nuclear energy.

“America is now on the cusp of energy independence, but the President would like to go farther. He would like to share our energy bounty with the world and let the spirit of competition benefit consumers by providing more choices in the marketplace. Already, we are sharing our natural gas.”

“We are increasing our coal exports substantially. These exports rose by an estimated 61 percent last year over 2016, according to the Energy Information Administration (EIA). Last August, the first shipment of Pennsylvania thermal coal bound for Ukraine left the Port of Baltimore. In the coming years, we will be exporting multiple fuels.”

“And not only that. We will export the same technologies that made us a clean, abundant, and diverse energy producer in the first place. By exporting our energy, we can free our friends and allies from fuel dependence on unfriendly nations.

“And by exporting our energy technology and know-how, we can help developing countries in Latin America, Africa, and Asia create their own energy renaissance and harness more energy to improve the lives of their citizens.”

“And that includes access to electricity. Over a billion people live without it. We want to reduce that number substantially in the coming years.”

“Now some aren’t happy with us exporting this technology because they oppose most energy production, specifically that of fossil fuels, which comprise 80 percent of world energy usage and continue to produce carbon emissions. I fear that this is the mindset of the Paris Agreement.”

“And while studies show that even by the year 2040, fossil fuels will still comprise 77 percent of world energy use, I believe that continued technological breakthroughs will help us defy this prediction.”

“What are the people without electricity supposed to do? Remember what we have done through technology…..we have not only produced more fossil energy with it; we’ve made that energy cleaner.”

“Since we’re making coal cleaner and since our technology can affordably extract massive amounts of lower-emissions natural gas, we’re likely to continue to reduce the overall emissions of our fossil fuels. That, again, is the New Energy Realism.”

“Thanks to the amazing power of human ingenuity and innovation, we don’t have to tolerate the intolerable…we don’t have to accept hideous sacrifices that harm the poorest among us.”

“And so let us reject the old energy pessimism – and embrace the New Energy Realism…. We would welcome – and help lead – a global alliance of countries willing to help make fossil fuels cleaner, rather than abandoning them. This will help nations diversify their energy supply…a key to achieving energy security.”

“And from that energy security… comes prosperity: affordability, economic growth…rising opportunities…optimism…and, most importantly, the freedom for each individual to pursue and achieve their dreams.”

“Combining opportunity with the freedom to design your own energy future, will enable the production of more energy from more sources, more affordably, and in a cleaner way than it ever could have in freedom’s absence.”

“It is by embracing this New Energy Realism that we will all move toward greater energy security and a brighter, more prosperous future. Let all nations embrace it – and the spirit of imagination and innovation that drives it – for their own sake and for the sake of the world.”