Sorry to be serious on April 1.  I am not a fan of ice charts restricted to one month, for reasons illustrated in the post Ice House of Mirrors (some humor there in honor of this day.) But March monthly average sets the baseline for the year’s melt season, and so there is considerable attention and significance attached to the month just concluded. 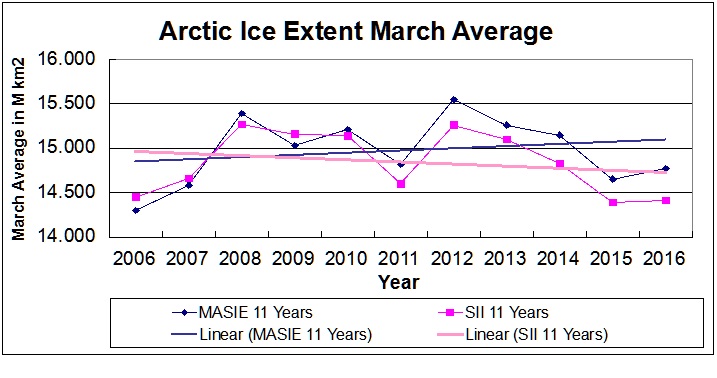 It is evident that the March annual maximum is trending slightly upward in MASIE and slightly downward in SII. Note that the indices were quite similar the first five years. Then since 2010, SII has declined quite strongly.

MASIE is based on 4 km cells and 40% ice coverage. Thus, for MASIE estimates, if a grid cell is deemed to have at least 40% ice, then 16 km2 is added to the total extent.

The significantly higher resolution in MASIE means that any error in detecting ice cover at the threshold level affects only 16 km2 in the MASIE total, versus at least 600 km2 variation in SII.  A few dozen SII cells falling below the 15% threshold is reported as a sizeable loss of ice in the Arctic.

With the background above, we can interpret NOAA`s meaning when they report (here) that 2016 winter ice extent is the smallest on record. That refers to the annual maximum daily extent they observed on March 24. Climatology usually uses the March average to indicate the year’s maximum (given the volatility of daily readings). As we can see, 2016 March average was higher than 2015, virtually tied with 2006 and just below 2011. SII showed March ice to be 364k km2 less than MASIE.

For more background on the two datasets see here.

As an example, consider how this March compares in the two indices.

In the graph MASIE shows 2016 starting the month at average extent, then declining and then recovering.  2016 ended below average in extent and comparable to 2015.  Meanwhile SII showed much less extent, rising to a late maximum and then declining sharply to be 400k km2 less at day 91.

Results for the first quarter of the year show the large differences between the two indices. SII portrays this winter as abnormally low, while MASIE shows an average year, slightly higher than 2015.

Looking at the extents in the various seas making up the NH Sea Ice, it is clear that all are typical, with three exceptions.  Compared to 2015, Barents and Baffin Bay are down (Barents lost 100k km2 in the last five days), while Okhotsk surplus more than offsets the losses elsewhere.

As the divergence of SII increases, it becomes less clear what it is really measuring.

The tables below give the reported ice extents in M km2: 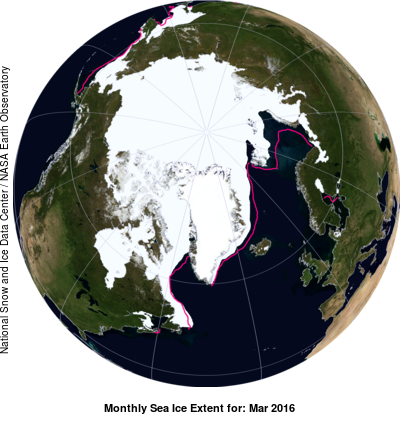 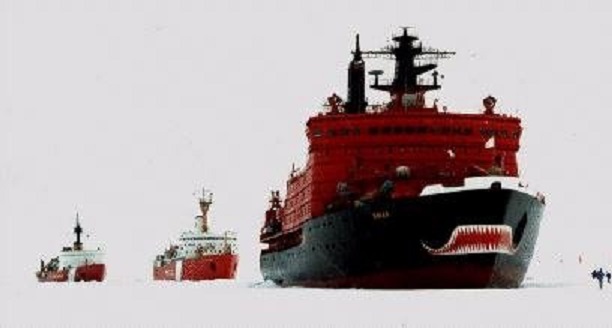