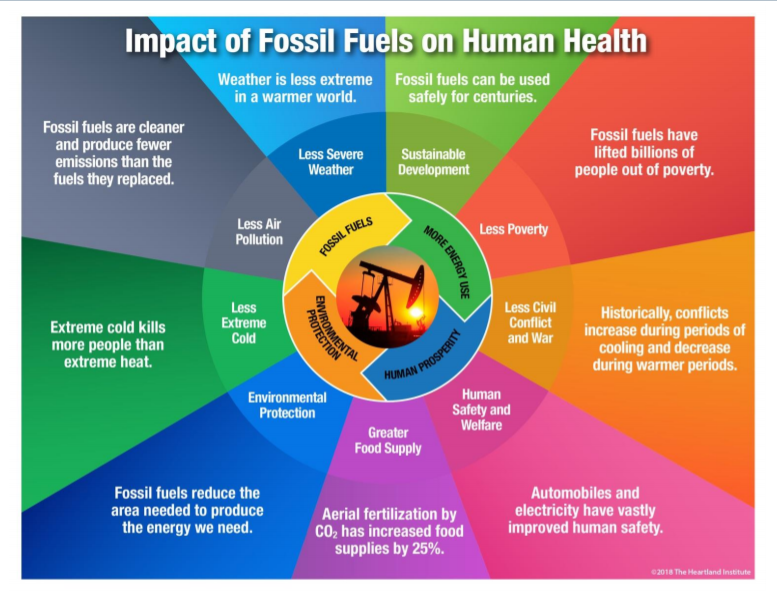 Those who seek the truth about global warming/climate change should welcome this latest publication from the Nongovernmental International Panel on Climate Change (NIPCC). Excerpts from the Coauthors’ introduction in italics with my bolds. H/T Lubos Motl

Climate Change Reconsidered II: Fossil Fuels assesses the costs and benefits of the use of fossil fuels (principally coal, oil, and natural gas) by reviewing scientific and economic literature on organic chemistry, climate science, public health, economic history, human security, and theoretical studies based on integrated assessment models (IAMs). It is the fifth volume in the Climate Change Reconsidered series and, like the preceding volumes, it focuses on research overlooked or ignored by the United Nations’ Intergovernmental Panel on Climate Change (IPCC).

NIPCC was created by Dr. S. Fred Singer in 2003 to provide an independent peer review of the reports of the United Nations’ Intergovernmental Panel on Climate Change (IPCC). Unlike the IPCC and as its name suggests, NIPCC is a private association of scientists and other experts and nonprofit organizations. It is not a government entity and is not beholden to any political or corporate benefactors. This and previous volumes in the CCR series, along with other publications and information about NIPCC, are available for free on NIPCC’s website .

The NIPCC authors do something their IPCC counterparts never did: conduct an evenhanded cost-benefit analysis of the use of fossil fuels. Despite calling for the end of reliance on fossil fuels by 2100, the IPCC never produced an accounting of the opportunity cost of restricting or banning their use. That cost, a literature review shows, would be enormous.

We thank the more-than-100 scientists, scholars, and experts who participated over the course of four years in writing, reviewing, editing, and proofreading this volume. This was a huge undertaking that involved thousands of hours of effort, the vast majority of it unpaid. The result exceeded our hopes, and we trust it meets your expectations.

The NIPCC authors cite thousands of books, scholarly articles, and reports that contradict the IPCC’s alarmist narrative. We once again tried to remain true to the facts when representing the findings of others, often by quoting directly and at some length from original sources and describing the methodology used and qualifications that accompanied the stated conclusions. The result may seem tedious at times, but we believe this was necessary and appropriate for a reference work challenging many popular beliefs.

The NIPCC authors conclude, “The global war on energy freedom, which commenced in earnest in the 1980s and reached a fever pitch in the second decade of the twenty-first century, was never founded on sound science or economics. The world’s policymakers ought to acknowledge this truth and end that war.”

Lubos Motl commented on this publication following his translating of the SPM into Czech.  Some excerpts in italics.

The NIPCC reports are actually amazing

Previous NIPCC volumes have also been extensive and they dedicated more space to the physical and biological scientific foundations. The newest 2019 report dedicated to the fossil fuels is unavoidably more practical and economics-oriented.

But it rationally discusses all the extra layers of the causal chains of the climate warning. Even if one assumes that there will be a warming, does it hurt the environment? The economy? Don’t the benefits exceed the costs? Don’t the costs of the mitigation policies exceed their benefits? As you may guess, the correct answers to all these questions – advocated in the NIPCC report – are almost universally the “skeptical ones”.

It’s so unfortunate that despite the higher quality of the NIPCC report (or at least comparable quality, if one were really generous to the IPCC), the left-wing media establishment – in some loose alliance with the governments – was capable of promoting the IPCC reports as if they were the Holy Scriptures while the NIPCC reports remained almost completely hidden from the world public.