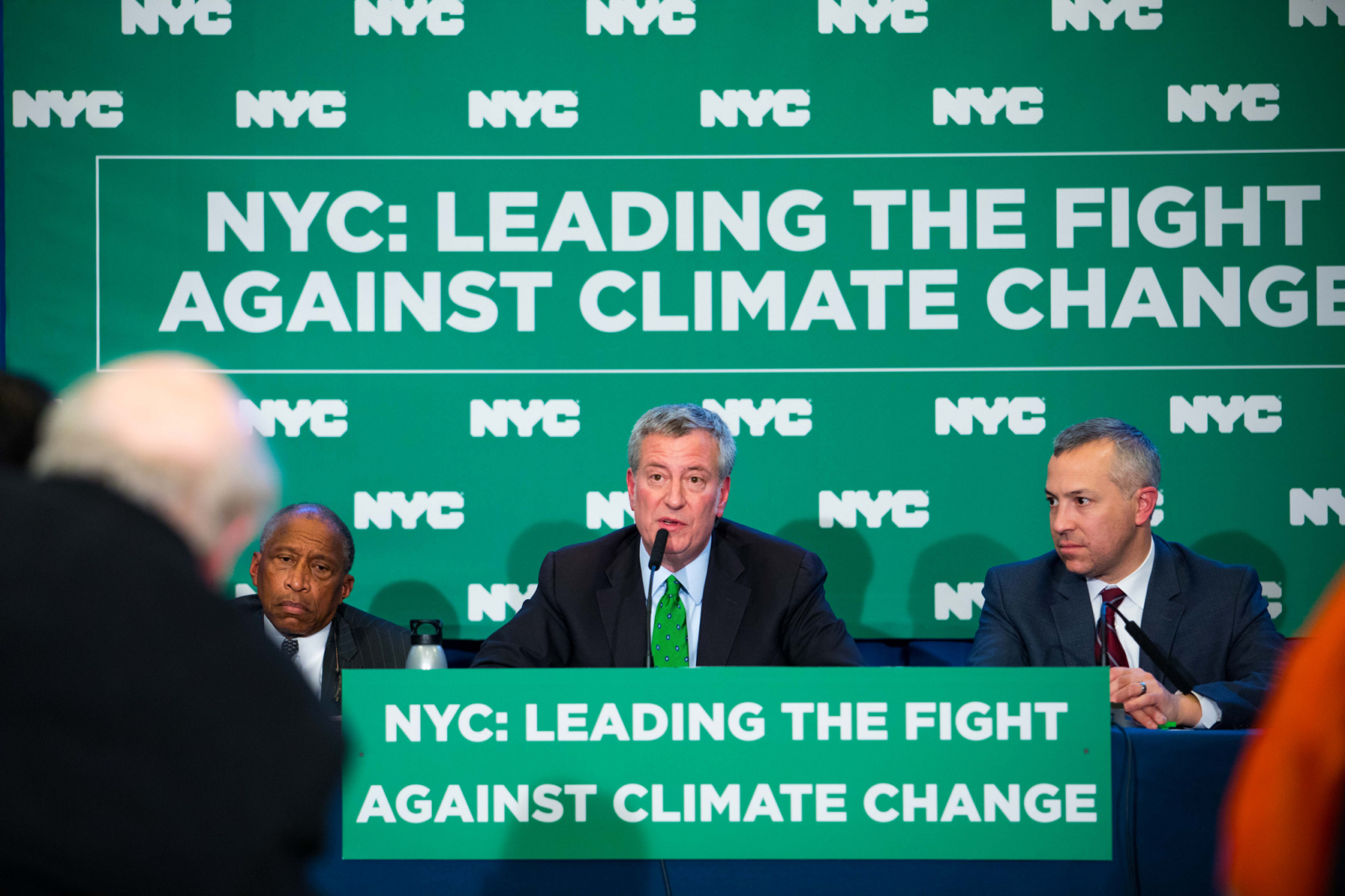 On January 10, 2018, New York City Mayor Bill de Blasio announced that he was suing five energy companies, seeking damages to pay for harm the city has faced as a result of climate change. In conjunction, the city also announced that it planned to divest its pension fund from fossil fuels. A year later, the city is seeking to revamp its legal strategy after the lawsuit’s swift dismissal in federal court and is no closer to divesting than it was before its big announcement.

While New York City has failed to achieve actionable results on these fronts, Mayor de Blasio has succeeded in one regard: boosting his liberal credentials as he contemplates a 2020 presidential run, a goal that may have been the motivation behind both announcements in the first place.

U.S. District Judge John Keenan dismissed New York City’s lawsuit shortly after it was filed, in part citing the hypocrisy of the city suing companies for producing a product it continues to rely on. “Does the city have clean hands?” Judge Keenan asked the city’s attorney, noting that Mayor de Blasio’s government, too, produces the emissions they say are responsible for the city’s climate change-related impacts.

Judge Keenan was not the first to rule in favor of the energy companies either. Less than one month before the New York City judge made his decision, U.S. District Court Judge William Alsup dismissed nearly identical lawsuits brought in California by the cities of San Francisco and Oakland. All three lawsuits are now being heard on appeal. Although, a recent change of counsel in California suggests that the New York case could stand less of chance now than it did the first time around.

In late November, the plaintiffs’ firm representing all three cities when they first filed their cases, Hagens Berman, was fired by San Francisco and Oakland and replaced with Sher Edling, Hagens Berman’s direct competitor in the climate litigation space. Mayor de Blasio, meanwhile, has continued to retain Hagens Berman, perhaps unconcerned with the final result of his case, so long as it attracts positive headlines praising his “climate leadership.”

That’s the take of at least one group who issued a statement critical of Mayor de Blasio on the anniversary of his announcement. “City officials, including Mayor de Blasio, have made clear that the true purpose of the lawsuit is to attack manufacturers and manufacturing workers,” said Linda Kelly, Senior Vice President and General Counsel of the National Association of Manufacturers.

Indeed, shortly after the city filed its climate lawsuit, Mayor de Blasio appeared as a guest on U.S. Senator Bernie Sanders’s (D-VT) podcast where he spoke about the case. “Let’s help bring the death knell to this industry that’s done so much harm,” Mayor de Blasio said of the recent announcements. His sentiments were echoed by New York City’s chief environmental lawyer, Susan Amron, who told a friendly crowd at last year’s Climate Week NYC, “[R]eally what we’re trying to do is affect the bottom line – the financial equation for the use of fossil fuels.”

This language – both from Mayor de Blasio and Amron – would seem to contradict the language of the city’s lawsuit. The case’s complaint reads, “The City does not seek to impose liability on Defendants for their direct emissions of greenhouse gases, and does not seek to restrain Defendants from engaging in their business operations.” New York City’s lawsuit explicitly denies that the city is seeking to restrict ongoing business operations, but Mayor de Blasio and Amron have both made comments publicly that imply otherwise.

Speculation that Mayor de Blasio has larger political aspirations – including a run for the White House – in his sights has been a through line throughout his tenure- a fact New Yorkers were quick to note at the time that his lawsuit was filed, calling it “more posturing than substance.” Before he seeks out Pennsylvania Avenue, however, Mayor de Blasio reportedly has room to focus on fulfilling the duties of his current office.

A recent article from The New York Times slammed “New York’s Vanishing Mayor” for being absent from work, finding that he averaged ten days in City Hall per month in 2018 and consequently “the practical mechanics of government are running less smoothly.” De Blasio responded by saying he has a “huge, ambitious agenda,” which he was working “at a great level of intensity…to get it done.”

There’s no doubt about the mayor’s ambitions, but attacking the energy companies that will keep his constituents warm through the winter and fuel his caravan of SUVs is a misguided approach to tackling climate change. There are many actions that can be taken to mitigate and address its effects. Spending taxpayer money to boost Mayor de Blasio’s national profile surely isn’t one of them.

Jude Clemente is the Editor at RealClearEnergy.

At this rate we are all going to freeze in the dark.