Previous posts described how the Northwest Passage was treacherously laden with ice this year.  The image above shows how the freezing proceeded in this region over the last 16 days.  Oct. 1 the CAA ice extent (Canadian Arctic Archipelago) was 609k km2, then waffled back and forth until growing sharply the last four days to 786k km2.  On the right, Baffin Bay also doubled in that period up to 150k km2.  On the left and bottom, Beaufort Sea added 324k km2 up to 943k km2, nearly 90% of the maximum last March. 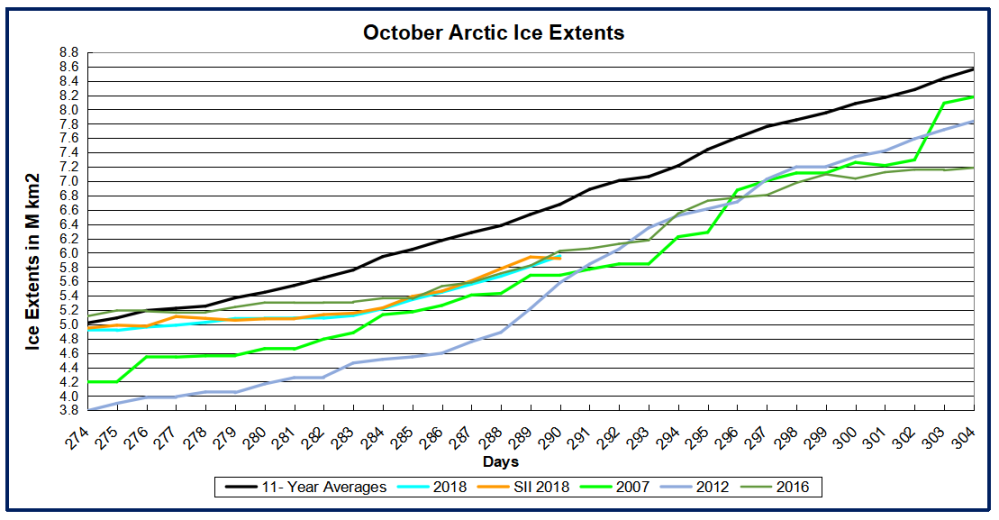 The graph shows MASIE reporting ice extents totaling 5.96M km2 yesterday,  700k km2 below the 11 year average (2007 to 2017 inclusive).  Note how 2018 started on average, then went fairly flat the first week or so, and lately is adding extent at the same rate as the average.  Presently, 2018 is about five days behind the average, tracking closely the 2016 ice growth.  NOAA’s Sea Ice Index is matching MASIE,  while 2007 and 2012 are not far behind.

The current IMS Snow and Ice Chart shows how snow cover is spreading rapidly across both Canada and Siberia.  Dr. Judah Cohen comments on this aspect at his AER blog Arctic Oscillation and Polar Vortex Analysis and Forecasts  Excerpts in italics with my bolds.

I present what is I believe is the latest European Centre for Medium Range Weather Forecasts (ECMWF) winter forecast in Figure i taken from climate.copernicus.eu. The ECMWF model is generally considered the best forecast model on the planet. The first thing that jumps out at me is the predicted classic or text book positive Pacific North American (PNA) pattern with a deep Aleutian Low, ridging or elevated heights across northwestern North America including Alaska and troughing or low heights in the Southeastern US. The ECMWF model is also predicting a quasi-negative NAO with the southern pole or center of action more classically represented than the northern pole. But in regards to the US winter this represents a suppressed storm track along the Eastern Seaboard. A positive PNA should yield an overall cold winter to the Eastern US. The ECMWF model is most confident in a relatively cold winter in the Southeastern US with greater uncertainty in the Northeastern US while the suppressed storm track will bring elevated risks of East Coast snowstorms. And El Niño does tend to focus the greatest snow threat, at least relative to normal, in the Mid-Atlantic. If you are a winter weather enthusiast especially a snow lover living in the Mid-Atlantic this ECMWF winter forecast should have you very excited.

The other feature that jumps out at me is high latitude blocking. I already mentioned the blocking near Alaska but there is a second center near Scandinavia that extends eastward into the Barents-Kara Seas. If the ECMWF was predicting a textbook negative NAO this block would be closer to Greenland. I believe that if the ECMWF forecast is correct and the block sets up near Scandinavia this is not as cold for Europe as the classic negative NAO but would instead focus the cold more in Asia. However I do think some of that cold would likely be drawn eastward underneath the blocking high and could result in a cold, possibly snowy winter for Central and/or Southeastern Europe. The other thing to watch is that a blocking high near Scandinavia and the Barents-Kara Seas coupled with a deep Aleutian Low is ideal for transferring energy from the troposphere into the stratosphere forcing a PV disruption. Now I don’t believe the ECMWF forecast is a consequence of a polar vortex disruption but is strongly suggestive of one. And if one does occur, then I would expect an increased probability of a more classic negative NAO to follow.