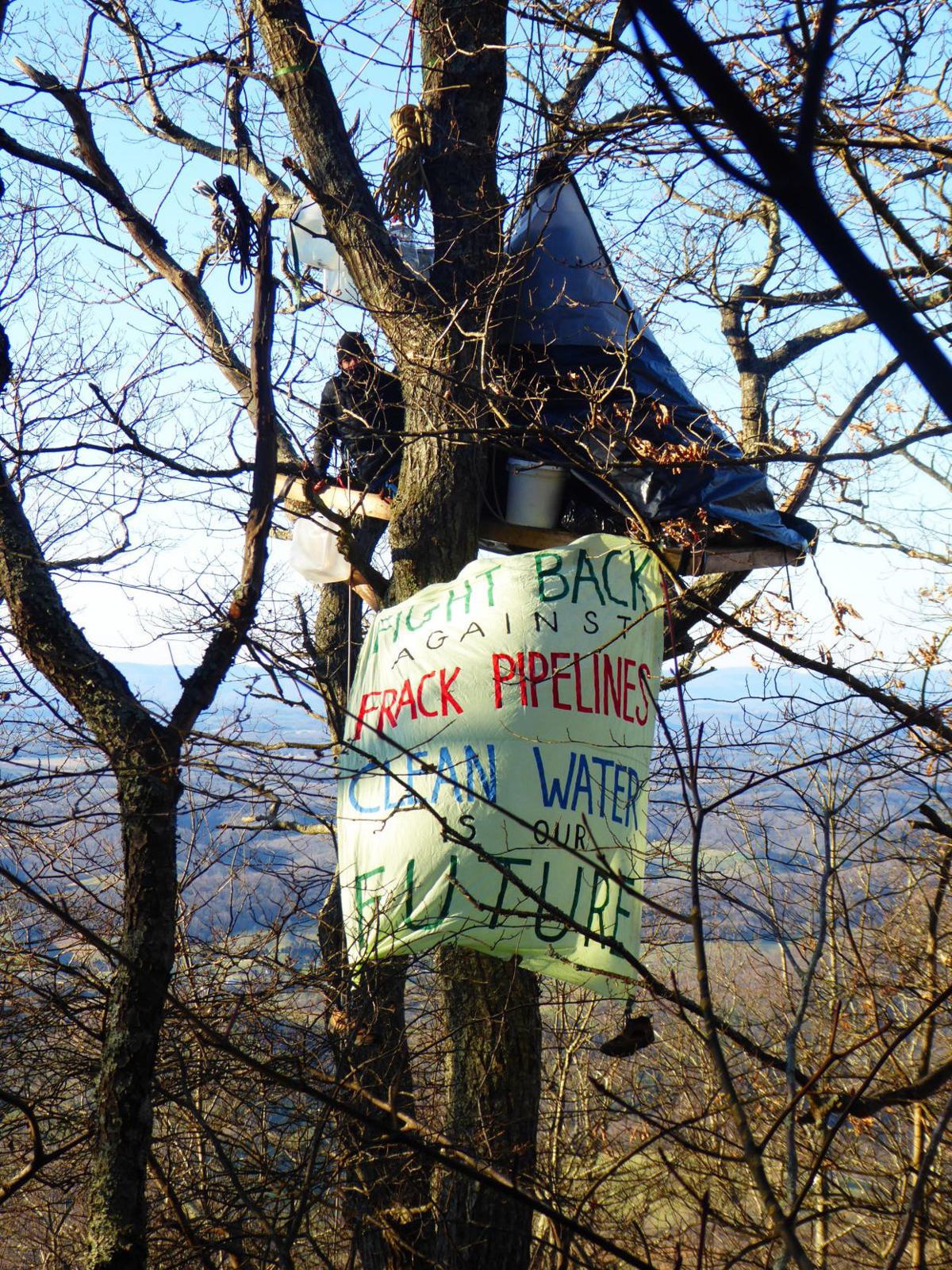 Since Feb. 26, two protesters have been on platforms in two trees on Peters Mountain with hopes of preventing the Mountain Valley Pipeline from moving forward.

Green activists are extremely excited to hear a Boston judge yesterday acquitted 13 protesters who attempted to block construction of a fracking gas pipeline in 2015. Posts at various activist sites repeat an article from the Independent which says:

More than a dozen protesters who clambered into holes dug for a high pressure gas pipeline said they had been found not responsible by a judge after hearing them argue their actions to try and stop climate change were a legal “necessity”.

Karenna Gore, the daughter of former Vice President Al Gore, was among more than 198 people who were arrested because of their 2015 actions protesting the pipeline in West Roxbury, Massachusetts, a suburb of Boston. Thirteen people were to go on trial this week, though prosecutors downgraded their original criminal charges to one of civil infraction.

On Tuesday, Judge Mary Ann Driscoll of West Roxbury District Court, found all 13 defendants not responsible, the equivalent of not guilty in a criminal case. She did so after each of the defendants addressed the judge and explained why they were driven to try and halt the pipeline’s construction.

Earlier this month in Roanoke West Virginia, a judge issued a restraining order against protesters lodged in trees trying to prevent logging for constructing a gas pipeline. From the Roanoke Times:

A West Virginia judge has granted a temporary restraining order against pipeline protesters sitting in trees, leaving unanswered the question of how to remove them.

The protesters are “temporarily restrained from impeding … access” to a section of the Jefferson National Forest where construction of a natural gas pipeline is planned, the order from Monroe County Circuit Court Judge Robert Irons states.

In seeking the order, Mountain Valley Pipeline said in court papers that the “tree sit” protest could prevent it from cutting trees along the pipeline’s path in time to meet a March 31 deadline imposed by federal wildlife protections.

That is just what the protesters intend. If members of the group, assisted by a network of supporters, remain perched on wooden platforms in two trees about 60 feet above the ground, law enforcement officials could be asked to get them down.

“It’s a very good question,” Monroe County Sheriff Ken Hedrick said. “I’ve been puzzling over the answer myself. How in the world would you get them out of the trees?”

Hedrick said his office has received no instructions from the judge to serve or enforce the order — leaving matters up in the air for now.

The temporary restraining order, dated Thursday, is effective for 10 days. Additional details could come out Tuesday, when a hearing is scheduled on Mountain Valley’s request for a preliminary injunction, which could carry more weight and last longer.

Hedrick said it’s possible that the U.S. Forest Service — essentially the landowner that granted Mountain Valley a right of way through about 3.5 miles of woods — could take the lead in enforcing the order.

Forest Service officials have said only that they are monitoring the situation.

Meanwhile, the loosely organized group of protesters says it has no plans to back down from stands in two trees along the ridgeline of Peters Mountain, where the pipeline would pass under the Appalachian Trail.

Some points should be considered. Unlike the valve turners, the Boston protesters did not vandalize private property and equipment. Also, the pipeline was built anyway. These facts may have led to the leniency.

In the West Virginia case, the main concern seems to be conserving the forest and water purity, rather than claiming to stop global warming. Still that state may be less tolerant of obstruction by greens.

Mountain Valley Pipeline had sought the order, saying the protest could prevent cutting trees along the pipeline’s path in time to meet a March 31 federal wildlife protection deadline. A licensed surveyor testified the protesters were outside of the no-cut zone and inside the company’s right of way, but the protesters’ attorney, William DePaulo, pointed out mapping inconsistencies.

In his ruling, Irons highlighted concerns over the map data’s accuracy and questioned the urgency to reach a decision over two trees along the 300-mile (480-kilometer) pipeline.

Speaking of leaving matters up in the air, the pipeline protesters have been in the trees for a month, which is impressive.  But they are far from setting a record for moral pedestals.  That honor goes to Simeon the Stylite (390-459), an ascetic saint who achieved notability for living 37 years on a small platform on top of a pillar near Aleppo, Syria.