Behemoth, Canada’s Wonderland, Ontario   Behemoth’s bright yellow-and-blue steel stands out against the Ontario landscape. At one point the roller coaster, which opened in 2008, drops 230 feet at a 75-degree angle and hits speeds of 77 mph. Its open-air seating gives every rider a front seat to the action.

The globally-averaged annual combined land and ocean surface temperature (GST) anomaly change features a slowdown in the rate of global warming in the mid-twentieth century and the beginning of the twenty-first century. Here, it is shown that the hiatus in the rate of global warming typically occurs when the internally generated cooling associated with the cool phase of the multi-decadal variability overcomes the secular warming from human-induced forcing.

We provide compelling evidence that the global warming hiatus is a natural product of the interplays between a secular warming tendency due in a large part to the buildup of anthropogenic greenhouse gas concentrations, in particular CO2 concentration, and internally generated cooling by a cool phase of a quasi-60-year oscillatory variability that is closely associated with the Atlantic multi-decadal oscillation (AMO) and the Pacific decadal oscillation (PDO). We further illuminate that the AMO can be considered as a useful indicator and the PDO can be implicated as a harbinger of variations in global annual average surface temperature on multi-decadal timescales.

Our results suggest that the recent observed hiatus in the rate of global warming will very likely extend for several more years due to the cooling phase of the quasi-60-year oscillatory variability superimposed on the secular warming trend.

CO2 sceptics have proposed similar explanations for the global temperature pattern, but were ignored heretofore. For example Syun-Ichi Akasofu,
Two Natural Components of the Recent Climate Change:
(1) The Recovery from the Little Ice Age  (A Possible Cause of Global Warming) and
(2) The Multi-decadal Oscillation  (The Recent Halting of the Warming):

Note that the hypothesis is virtually the same, except for the leap of faith to attribute the secular background rise to CO2, rather than to a steady recovery from the Little Ice Age (LIA).  Finally climate modelers are admitting that natural variability is strong enough to offset warming from any other means.  And by extension the rise in temperatures late last century was due in large measure to a warming natural phase.

(Aside: “Secular” has two main meanings:
a : of or relating to the worldly or temporal secular concerns, not overtly or specifically religious
b : of or relating to a long term of indefinite duration, existing or continuing through ages or centuries
How ironic that some climate scientists use the term “secular” while applying a faith-based attribution.)

Nicola Scafetta is another scientist asserting a solar-lunar cyclical climate pattern based on oscillations within the solar system. More at Scaffetta vs. IPCC: Dueling Climate Theories

The Thrill of Riding the Climate Roller Coaster

The original amusement park roller coasters had a single ratcheting up an incline to the top, with gravity pulling the train down to the bottom through a series of curving sine wave peaks and valleys. Newer rides like the one at Wonderland have more than one ratcheting upward to start a new decline. A recent paper explains how this additional excitement operates in our climate system.

Reconciling the signal and noise of atmospheric warming on decadal timescales by Roger N. Jones and James H. Ricketts Victoria University, Melbourne, Australia was published March 16, 2017 in Earth System Dynamics. From the abstract:

Interactions between externally forced and internally generated climate variations on decadal timescales is a major determinant of changing climate risk. Severe testing is applied to observed global and regional surface and satellite temperatures and modelled surface temperatures to determine whether these interactions are independent, as in the traditional signal-to-noise model, or whether they interact, resulting in step-like warming. The multistep bivariate test is used to detect step changes in temperature data. The resulting data are then subject to six tests designed to distinguish between the two statistical hypotheses, hstep and htrend. 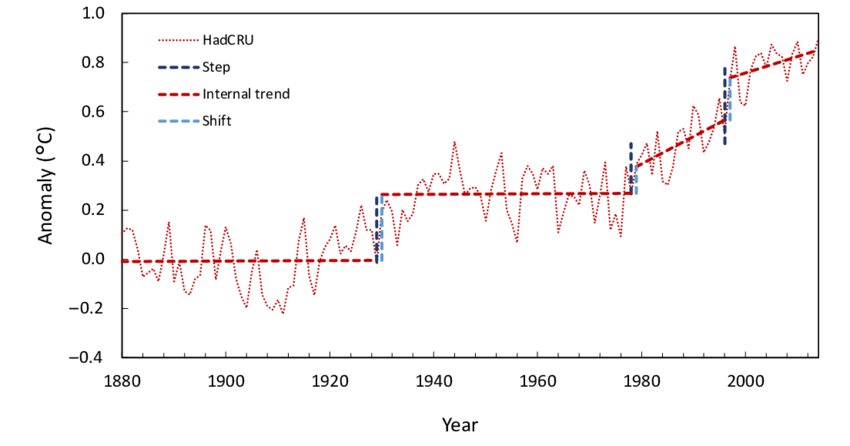 Figure 1. Record of mean annual surface temperature anomalies 1880–2014 from the Hadley Centre and Climate Research Unit (HadCRU), showing step changes (p < 0.01) and internal trends and shifts taken from the end of one internal trend to the start of the next across a step.

Test 1: since the mid-20th century, most observed warming has taken place in four events: in 1979/80 and 1997/98 at the global scale, 1988/89 in the Northern Hemisphere and 1968–70 in the Southern Hemisphere. Temperature is more step-like than trend-like on a regional basis. Satellite temperature is more step-like than surface temperature. Warming from internal trends is less than 40 % of the total for four of five global records tested (1880–2013/14).

Test 4: in three regions tested, the change between stationary and non-stationary temperatures is step-like and attributable to external forcing.

Test 6: across a selection of tests, a simple stepladder model better represents the internal structures of warming than a simple trend, providing strong evidence that the climate system is exhibiting complex system behaviour on decadal timescales.

This model indicates that in situ warming of the atmosphere does not occur; instead, a store-and-release mechanism from the ocean to the atmosphere is proposed. It is physically plausible and theoretically sound. The presence of step-like – rather than gradual – warming is important information for characterising and managing future climate risk. (my bold)

The climate roller coaster is thrilling because we can’t see the track ahead for certain. Are we coming off a major peak and heading down into a deep valley? (Scafetta) Or is this a small dip before heading up again? (Yao et al.) Or are we hitting the top of the recovery from 1850 and starting into the next (hopefully little) ice age as signaled by the quiet sun (Akasofu, Abdussamatov)?