Medical practitioners know this principle, the closest approximation in the Hippocratic corpus coming from Epidemics: “The physician must be able to tell the antecedents, know the present, and foretell the future – must mediate these things, and have two special objects in view with regard to disease, namely, to do good or to do no harm.”

Every intervention has consequences by which its success is measured. Effectiveness regards the quality of outcomes: Good things happened, Nothing happened, or Bad things happened. Of course, it may be a mixed bag in which the net must be weighed.

In addition, efficiency is considered (“evidence-based” in today’s jargon): It was worth it, It was not worth it, or It was worse than doing nothing. Both attainment of intended consequences, and collateral, unintended damages bear on the judgment.

More and more in the nations “leading on climate change” people are starting to question the actions of policymakers. Recently Robert Lyman, Ottawa Energy policy analyst presented on the theme: Can Canada Survive Climate Change Policy? From Friends of Science

It must indeed seem strange that someone would wonder about the effects of the policies now proposed to reduce greenhouse gas emissions as though the policies themselves are the threat. And yet they are.

I am not here to address the issue of how much human-related greenhouse gas emissions are contributing to increased concentrations of carbon dioxide in the atmosphere nor on the sensitivity of global temperatures and climate to the increases in those concentrations over time. There are others here far more qualified than I to discuss that.

Instead, I want to discuss the policy and program measures that the people of Canada and other countries, especially in the industrialized world, are being urged to adopt and what will be the implications of those policies and programs. Canada is the second largest country in the world, sparsely populated,
with vast transportation needs. We withstand long, cold winters featuring
short days, extremely low temperatures and lots of snow. Our energy and
resource industries would be penalized for providing the valuable materials
the rest of the world demands and uses.

The article goes into the history of how we all, including Canada got to this point. Then comes this.

Ladies and gentlemen, these commitments are just the beginning, the mere “foot in the door” for the more radical demands that lie ahead. We are still bound in principle to reduce Canadian GHG emissions by 50% from 2005 levels by 2050. The U.N still wants us to “show leadership” by reducing emissions by 80% from 2010 levels by 2050. A number of environmental groups in Canada and other countries have recently endorsed the Wind, Water and Sunlight, or WWS, vision. This vision seeks completely to eliminate the use of all fossils fuels – coal, oil, and natural gas – in the world by 2050. The New Democratic Party’s LEAP Manifesto endorses this vision, as does the Green Party and most of Canada’s influential environmental organizations. The government of Ontario also has formally committed the province to this vision. So have a number of large Canadian municipal governments. 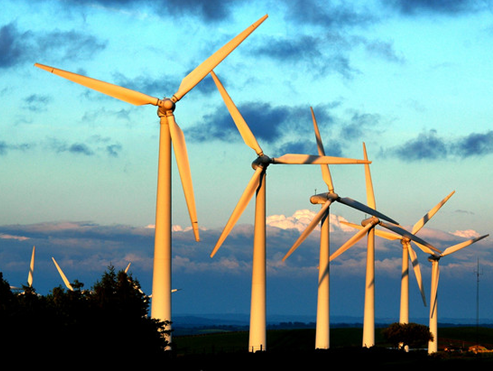 In practice, consumers pay twice, once for the (expensive) renewable
generation and then for the capital costs of the backup thermal plants.

How can we even begin to understand the magnitude of the changes being proposed? One way is to look at the sources of energy consumption and related emissions today. In 2005, Canadian emissions were 738 megatonnes of carbon dioxide equivalent. In 2014, after six years of the worst recession since the Great Depression, Canadians emitted less, 722 megatonnes. Twenty-six per cent of those emissions were from oil and gas production, 23 per cent were from transportation, and roughly equal portions of around 10 per cent were from electricity generation, buildings, industry and agriculture, with waste and other sources making up a residual 7 per cent. Assuming that emissions do not grow one bit over the next 32 years as a result of increased economic activity or increased population, achieving a 50 per cent emissions reduction from 2005 levels would mean reducing emissions to 369 megatonnes CO2 equivalent. That is comparable to completely eliminating the current emissions from oil and gas production, electricity generation, and all emissions-intensive industries like mining, petrochemicals, auto and parts manufacturing, iron, steel and cement. Gone. Achieving the aspirational goal of 80 per cent reduction recommended by the IPCC would mean reducing emissions to 147 megatonnes CO2 equivalent. That would be comparable to reducing Canada’s per capita emissions and our energy economy to the current levels of Bolivia, Sudan or Iraq. (original bold)

Which benefits would be achieved by incurring such costs?

Despite all the rhetoric about reducing world carbon dioxide emissions from fuel combustion and gas flaring, according to the U.S. Carbon dioxide information analysis center, they rose steadily from 16.6 Gigatonnes carbon dioxide equivalent in 1973 to 34.1 Gigatonnes in 2014. So, they more than doubled over that timeframe. Importantly, though, the origins of the emissions changed significantly. In 1973, the countries of the organization for economic cooperation and development, or OECD, accounted for two-thirds of global CO2 emissions from fuel combustion; by 2014, the OECD share had declined to just over a third. So all, or almost all, of the emissions growth occurred outside of the OECD. 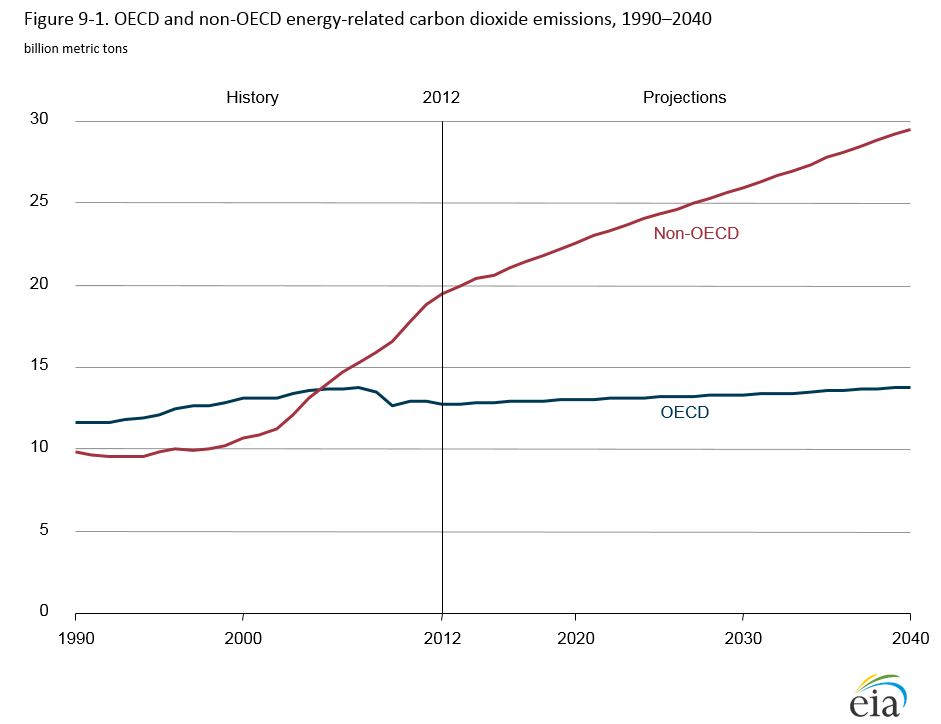 So, we have two sharply different perspectives of the future, the EIA’s projections of what probably will happen and the aspirations of the U.N. and many environmental groups as to what in their view should happen. Reducing emissions by 50% by 2050 to meet the U.N.’s vision would mean a global total of about 16 Gigatonnes, in contrast to the EIA’s projection of 43 Gigatonnes (Gt). The OECD countries – the United States, Canada, most of Europe, Japan, Australia and others – could eliminate 100% of their projected emissions of 14 Gt, and the world would still be over its target by 13 Gt.

There is not in Canada a comprehensive list of the measures that have been implemented by all orders of government to reduce greenhouse gas emissions. They have been increasing in number, reach and cost since 1988. I counted 37 different generic types of measures now in use. Large bureaucracies exist to design, implement, and (less frequently) evaluate these measures. They stretch like the tentacles of some vast octopus across every aspect of the Canadian economy and touch everyone’s life. As no one has ever established an inventory of the measures now in place or of those under consideration, no one knows how much these measures already cost Canadians. Two things are certain – they cost billions of dollars annually, and they are not going away soon, regardless of the taxes imposed on carbon. I might add a third certainty, which is that the government will continue to develop and implement more and more programs and regulations as time goes on.

Let me remind you of the conclusions reached by the federal government’s own monitor of program effectiveness, the Commissioner of the Environment and Sustainable Development.  Starting in 1998, the commissioner began to critique the government’s approach to managing emission reduction measures. In the seven reports that followed, there were five consistent themes.

I agree that we need an honest dialogue about climate change mitigation. It should start with the recognition that governments to date have publicly embraced emission reduction targets that are unachievable with present technology and at acceptable economic costs. We should acknowledge that we as a society have multiple goals of which environmental quality, however important one might think it is, represents only one. If we value our prosperity and unity as a federal, geographically diverse country, we must approach the climate change issue with a respect for all our collective goals.

Much of Canada’s current political elite favours the pursuit of international goals over the steadfast promotion of the Canadian interest, whether on issues of trade, security or the environment. Never before, however, have we faced a situation in which commitment to an international objective may well impose enormous and divisive costs on Canada for no discernable global environmental benefit. Climate change thus offers a clear dichotomy between the Canadian national interest and the global environmental agenda.